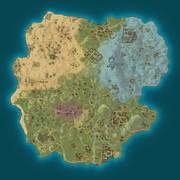 Map of the Realm

The Map of Realm Royale has many locations where all the fighting takes place. From the frozen Icehaven, to the Fungal Jungle, to the ruined Crossing, there are many unique places for players to land, gear up, and fight. The player can use a Map Marker to mark a place on the map, which is visible to you and your teammates. These map markers were added in the OB16 update, The Next Frontier.

Map markers are used to place a beacon on the map for you and your team to see, allowing people to more easily coordinate their movements. These beacons can be customized through Map Marker Skins