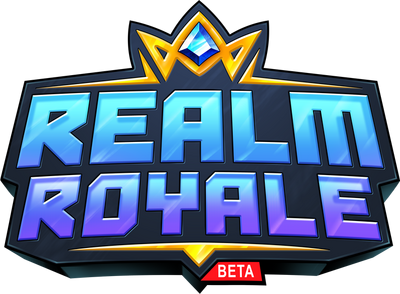 Realm Royale is a battle royale video game developed by Heroic Leap Games and published by Hi-Rez Studios. This game is a spin-off version Paladins, another game from the same publishers.

The game is currently in its beta stage. The game is available for download through Steam: Realm Royale Steam Store and is also available on other platforms like Playstation 4, Xbox an Nintendo Switch.

For the History of Realm Royale, see here

Be the last Champion standing in Realm Royale! Choose a class, then loot deadly weapons and powerful abilities to create your own Champion. Explore a fantasy world from horseback, and craft game-changing legendary gear. Can you survive the first 100-person fantasy Battle Royale?

Choose a class, Forge your legend[]

Explore a fantasy world in Realm Royale, the new Battle Royale inspired by the hit game Paladins. Choose your class, then loot fantastic weapons and magical abilities to create your own Champion. Stay ahead of the deadly fog by mounting up and moving out. Will you be the last Champion standing?

Choose from one of four classes before every match, each with its own gameplay-changing abilities. Become a Warrior, chug a shielding potion, and leap into battle. Soar through the skies as a Mage, slinging soul ghusts. Take steady aim as a long bow-wielding Hunter. Or blink onto a rooftop and snipe your enemies as an Assassin.

Go traditional with shotguns and snipers, or embrace the fantasy with ice staffs, swords, and crossbows there's plenty of weapons to fit your playstyle. If you want to win, you’ll need to craft Legendary Weapons at Forges scattered across the Realm. But be careful: While you’re crafting, your enemies may attack as smoke can be seen coming from the chimney at forges.

Mount up, explore the Realm[]

Journey through the lush jungle of Jaguar’s Claws and the scorched sands of Goblin Gulch. Visit frigid Everfrost and iridescent Fungal Forest. The best part: you don’t have to walk around this massive Realm. Just summon your mount to outrun the fog and ride into your next glorious battle!

Call your friends: It’s time to squad up. Realm Royale is the first Battle Royale designed to be played in four-person Squads. Help your team by dropping a Healing Totem, or plant a Sensor Drone to reveal incoming enemies. Each class has strengths and weaknesses, but by working together the crown royale could be yours.